Unless you have no interest in what is going on in the blogsphere, you might be forgiven for not being aware that Google launched a “Mobile Friendly Update” on April 21, and which has been dubbed by many quarters (erroneously, I would say), as a “Mobilegeddon”.

This has been one of the most highly anticipated and interesting updates that Google has given advanced warning for, but which so far, has turned out to be extremely mild and uneventful. Nonetheless, I have to give credit where credit is due, and thanks to Google’s “ultimatum”, I finally changed my site theme……..into a responsive one!

This, after 8 long years of using the same theme! Recently, I figured it was time to pull up my sleeves, and dig around for a suitable (responsive) theme, and then modify it for Modern Street. I also took the opportunity to relearn a lot of web design stuff with relation to WordPress, Dreamweaver, and responsive web design in general. Finally, I found one candidate in a free theme called Iconic One. This theme is stylish, simple, and fast loading, and most importantly – Responsive.

What is Responsive Mobile Design anyway?

This approach utilizes media queries to render the webpage optimally on the mobile screen with a minimum of scrolling/panning/resizing. Being responsive is different conceptually, from a mobile version or mobile app version of a website that for some reason, is unable to deploy a responsive design site-wide. It doesn’t require any form of mobile app programming, and thus is much more scalable, cost effective, and works for all but the most complex websites (e.g. Fiverr, eBay, and Amazon).

Certain sites are definitely too huge, dynamic, or based on very old CMSes that are unable to be made responsive. Thus, the workaround for this is to develop a separate mobile friendly version of the site (often with a stripped down design) that will detect a person’s browsing device and then if needed, redirect that person to the mobile friendly version. For most sites though, a responsive solution works just fine.

If there was a Web 2.0 before this, Responsive Web Design would be a Web 3.0

Do you notice how wide most (responsive) websites are today? No more narrow and small designs. Everything needs to be WIDE and BIG so that it can resize nicely on mobile devices! 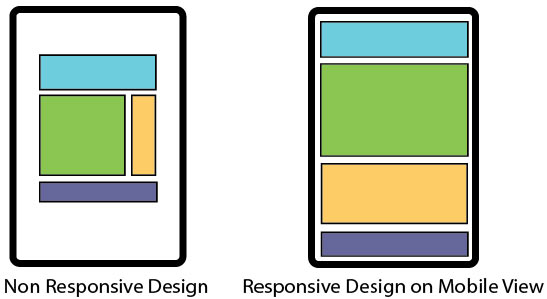 Many companies are still caught in a lurch, because this change has been nothing short of rapid. In particular, large ecommerce/shopping/forum sites have been caught out by the rapidity of this “shift” towards mobile browsing. For example, as of this moment, Amazon Associate’s Program (the huge affiliate publisher network of Amazon), is still woefully left behind with many non responsive banners and widgets, which are not suitable for responsive website deployment (the last time I checked).

Looking towards the future…

The Web is always changing. and nothing stays still for long. HTML 5 and CSS3 are becoming the new standards for web mobile design, and many of the older HTML standards will become deprecated over time. Google has embraced a “Mobile First” approach, and has actively encouraged app developers to come on board over the past 5 years. The result is over the couple of years, we will see a major transition from desktop browsing, which is currently estimated at just under half of all browsing modes, shifting towards mobile browsing, which will become the dominant browsing mode.

Looking back, it’s quite amazing to me how, after all the dust has settled, that no one really predicted where we would end up today. Take for example, the .mobi Top Level Domain (TLD) extension, which in prior to 2007 was being touted as the way to go for mobile browsing; now it has all but completely died out. The same goes for the whole bunch of new TLDs introduced by ICANN (exciting at that time) which have never made any sort of impact in the search engines till today. Not as long as Google calls the shots.

Way back in 2008, I blogged on Google’s prediction that mobile-only browsers will be dead soon – well, today we can see the extent of just how true this prediction has become……

This website uses cookies to improve your experience while you navigate through the website. Out of these, the cookies that are categorized as necessary are stored on your browser as they are essential for the working of basic functionalities of the website. We also use third-party cookies that help us analyze and understand how you use this website. These cookies will be stored in your browser only with your consent. You also have the option to opt-out of these cookies. But opting out of some of these cookies may affect your browsing experience.
Necessary Always Enabled
Necessary cookies are absolutely essential for the website to function properly. This category only includes cookies that ensures basic functionalities and security features of the website. These cookies do not store any personal information.
Non-necessary
Any cookies that may not be particularly necessary for the website to function and is used specifically to collect user personal data via analytics, ads, other embedded contents are termed as non-necessary cookies. It is mandatory to procure user consent prior to running these cookies on your website.
SAVE & ACCEPT